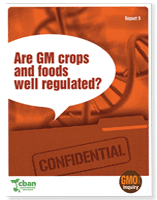 Government regulation determines what genetically modified (GM, also called genetically engineered) foods are on the shelves, and what GM crops and animals can be planted and raised. For twenty years, the Canadian government has been approving genetically modified organisms (GMOs) in a process that is not transparent, and does not include public participation or consultation. The regulatory system has been widely criticized but has not significantly changed in two decades.

In 1999, government departments asked The Royal Society of Canada to form the Expert Panel on the Future of Food Biotechnology to assess the ability of Canadian regulation to deal with GMOs. In 2001, the Expert Panel released a report that criticized the existing system, and made 53 recommendations for significant regulatory reform. Today, only two recommendations have been fully implemented.

The Canadian regulatory system for GMOs is designed around two competing goals: to support industry and protect public safety. No new laws and regulations were created when GMOs were first introduced. Instead, the responsibilities were divided between existing regulations and government departments. GMOs are regulated under the broader categories of “Novel Foods” and “Plants with Novel Traits” that include products of other technologies such as conventional plant breeding.

The Canadian government does not do any of its own safety testing. Instead, Health Canada and the Canadian Food Inspection Agency rely on information and data submitted by the company requesting product approval. This information is not disclosed to the public or independent scientists because it is considered “Confidential Business Information.” In fact, government departments do not disclose what GMOs they are reviewing unless companies have already released this information to the public.

Precisely how regulators assess the safety of GM crops and foods, and what data is evaluated, is unknown. The process to assess the risks of new GM foods, crops and animals happens behind closed doors. The only non-governmental party that has access to the regulatory process is the biotechnology industry itself. The only public document provided by the government in the process of GMO risk assessment is a short summary of each product approval decision, which is posted online after the decision has been made. These summaries are brief and only vaguely describe how and why a product has been approved.

GM foods and crops are regulated based on a very narrow set of considerations. The government limits risk assessment to (some) safety questions and does not consider “non-scientific” concerns such as economic impacts. GM regulation in Canada does not evaluate long-term impacts or include any formal mechanisms to track and re-evaluate impacts over time.

There is an almost total lack of transparency in the regulation of GMOs in Canada. The process takes place without public participation, based on data submitted by companies that is not disclosed to the public or independent scientists. There are no consultations with farmers or consumers. The government posts lists of approved “Novel Foods” and “Plants with Novel Traits” but the GMOs on these lists are not clearly identified and many are not actually being grown or sold. There is no mandatory labelling of GM foods in Canada.