What is Genetic Modification?

Genetic modification (GM) is a term commonly used for genetic engineering or GE – it is the introduction of new characteristics to an organism by making changes directly to its genetic makeup, e.g. DNA, through intervention at the molecular level.

Scientists can change the traits of organisms by inserting pieces of DNA, whole genes, or long stretches of assembled DNA segments originating from different sources. The inserted genetic material is often derived from unrelated species, but it can also be taken from the same or a closely related species, or be newly made up. Scientists can also change traits by disrupting genes, deleting or swapping small DNA segments, or introducing genetic material to silence genes.

Unlike conventional breeding and hybridization, genetic engineering techniques are artificial laboratory techniques that directly intervene in the genome. The techniques enable the direct transfer of genes between organisms in different species or kingdoms that would never breed in nature, the introduction of new sequences that do not even exist in nature, and direct intervention to induce changes in the genome (such as with gene editing techniques). Click here for the article by Janet Cotter “What is a GMO?” or CBAN’s factsheet Introduction to Genetic Engineering (May 2021).

Is it called GM or GE?

The terms genetic engineering (GE) and genetic modification (GM) are both used to describe recombinant DNA (rDNA) technology. GM is the term used in international agreements and in European regulation as well as in many other English-speaking countries. GE is the term used in U.S. legislation. The Canadian government uses both terms and instead regulates what it calls “Plants with Novel Traits” and “Novel Foods” which include products of genetic engineering but also products of conventional plant breeding.

To add to confusion, the term GM is often used imprecisely to include other, older technologies. For example, industry often says that farmers have been “modifying” plants and animals for centuries. While farmer plant and animal breeding is the foundation of our entire food system, directly changing the genetic makeup of organisms at the molecular level in the laboratory is entirely new and different.

What GM Foods are on the Market?

There is some GM salmon sold in Canada and five GM crops are grown in Canada: corn, soy, canola, white sugar beet and a small amount of alfalfa. These GM crops are widely used as ingredients in processed foods and as animal feed in meat and dairy production. There is also very small amount of GM sweet corn on the market, but there is no GM popcorn. Also, GM cotton (cottonseed oil) and some papaya and a few types of squash are grown in the U.S. and can be imported into Canada. GM apples and potatoes could soon be sold as food in Canada. Click here for the list of GM products on the market, and some information on what is NOT on the market. For details on where these GM crops are planted, and how much, see CBAN’s report “Where in the world are GM crops and foods?” , for details on how the government lists which GM foods are approved see CBAN’s report “Are GM Foods Better for Consumers?”

How Can I Avoid GM Foods?

Our government does not require labeling. But you can still make a choice:

Is there a PLU (price look-up) code that tells me if a product is a GMO?

(The Price-Look-Up codes are the small labels on your fruits and vegetables.)

There is no code for GMOs. The code number “8” is NO LONGER USED FOR GMOS: The International Federation for Produce Standards set aside a number (8) for identifying GM foods but it was not being used and was changed in 2015 to identify conventionally produce (not organic) food.

The code number “9” denotes organic produce: This code distinguish between organic and conventionally produced fresh fruits and vegetables. Organic food is produced without the use of any genetically modified organisms. Organic produce is identified with a number that begins with “9”: for example, 4011 identifies a conventionally grown papaya and 94011 identifies an organically grown papaya. But organic food is already identified with the national Canada Organic standard logo.

There are actually very few GM fruits and vegetables on the market. Click here for a list of GM foods sold in Canada.

Are GM Foods Safe to Eat?

We don’t know what, if any, impacts GM foods could have on our health. There are many unanswered safety questions. There is no scientific consensus on the safety of GM foods.

GM foods are approved for human consumption based on company-produced science. The data is kept confidential and is not peer-reviewed by independent scientists. There are very few long-term, independent tests on GM foods. Health Canada does not do its own testing. There is no mandatory labeling of GM foods in Canada, and no tracking or monitoring of possible health impacts.

What are the Environmental Risks?

Once GM plants are released into the environment they are difficult or impossible to control or recall. Genetic pollution is irreversible living pollution that self-replicates. Contamination of other plants is a major problem because the genes from crops can move, via seed and pollen flow. So far, the use of GM crops is resulting in increased herbicide use, the evolution and spread of herbicide tolerant weeds, and the expansion of industrial farming. Click here for more information on environmental impacts.

Patents on genetic sequences mean that corporations can own seeds, and the use of patented genetically modified traits has helped facilitate corporate consolidation in the seed market. Monsanto was the largest seed company in the world and owned about 86% of GM seeds sown globally but, in 2018, Monsanto was bought by Bayer, the second largest agrochemical company in the world. Bayer is one of the top four companies that dominate the global commercial seed market, and the pesticides market. Click here for more information.

Yes it is! Organic farmers reject the use of GMOs as well as synthetic pesticides, and they embrace many other important ecological and animal welfare practices. The national Canada Organic standard prohibits the use of genetically engineered (genetically modified or GM) seeds and other GM products, and it also 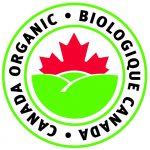