GMO Inquiry: Are GM Crops Better for the Environment? 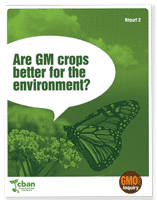 In this second report of GMO Inquiry 2015, we investigate the environmental impacts of genetically modified (GM; also called genetically engineered or GE) crops in Canada, and around the world.

After 20 years, most of the GM crops grown in Canada are herbicide-tolerant, and the rest are insect-resistant (some are both). There is limited data in Canada to help us examine the relationship between GM crops and pesticide use but we can see that, in general, herbicide use has increased over the past 20 years. The widespread cultivation of glyphosate-tolerant crops, in particular, has driven up the use of glyphosate-based herbicides.

GM insect-resistant (Bt) crops have reduced insecticide use in some countries. The Canadian government has not monitored the impact of Bt crops on insecticide use in Canada. However, insects are beginning to develop resistance to Bt crops in the US and other countries, and farmers are turning to other insecticide applications to control them. Additionally, Bt plants themselves produce insecticidal toxins that are released into the environment.

GM crops have also had a number of impacts on biodiversity. Herbicide-tolerant crops reduce weed diversity in and around fields, which in turn reduces habitat and food for other important species, including the Monarch butterfly. Studies have also observed that Bt crops can have negative impacts on non-target insects, including pollinators, and soil and water organisms. In addition, gene flow from GM crops poses a threat to non-GM crops and wild and weedy crop relatives, particularly in global centres of origin and diversity. Such GM contamination threatens the future of organic and ecological farming in Canada.

Future risks from GM crops and animals may look quite different from our current reality, as new organisms with new GM traits are introduced into our environment and food systems. For example, Canada has just approved a GM “non-browning” apple, and GM herbicide-tolerant and low-lignin alfalfa could be sold in 2016 for the first time.

The Minister of the Environment has approved the production of GM fast-growing salmon in Canada, though it is not yet approved for eating and is therefore not yet being grown. Canada also continues to allow field tests of GM forest trees. These GM crops and animals all pose new, unique risks that are hard to predict. Once they are released into the environment, however, genetically modified organisms are impossible
to control or recall.

Overall, GM crops, trees and animals are rooted in, and perpetuate, a model of agriculture that has a number of serious environmental impacts and is not sustainable in the long-term.