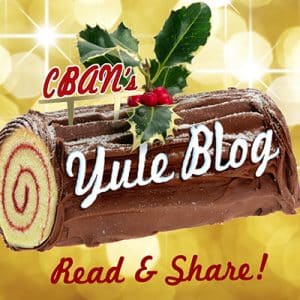 Welcome to CBAN’s Year-End Catch-Up! Our Yule Blog is an occasion for us to share some of the important news and analysis that you may have missed this year, with some info or implications that we didn’t have a chance to share.

All year long, we monitor a wide range of issues raised by the use of genetic engineering in food and farming. We make sure you have the most up-to-date, relevant and strategic news and action. Donate today.

cban.ca has updates and in-depth info
Visit cban.ca/issues for updates and analysis on issues raised by the use of GM in food and farming. And don’t forget to check out our 2019 publications at cban.ca/publications:
• GM Contamination in Canada: The failure to contain living modified organisms
• Genetically Modified Crops and Herbicides
• GM “Golden Rice” Vitamin-A Rice
• Introduction to Gene Editing
You can get up-to-date information on which GM foods are on the market at cban.ca/gmfoods

In January, CBAN will launch a new pamphlet called “Why Your Food Choices Matter,” for you to distribute at local events, local health food stores, or your farmers’ market. The pamphlet describes options for food choices that can help solve the climate crisis and the problems of corporate control and toxic pesticides, while supporting farmers who are growing food for a better future. The pamphlet introduces organic food, and provides the list of genetically engineered (genetically modified or GM) foods on the market in Canada. Are you a farmer with a CSA or market stand? Are you an engaged community member who organizes or participates in local events? Share this pamphlet with your customers and community members. View it at www.cban.ca/whyyourfoodchoicesmatter and order your copies now.

The industry campaign to calm consumer concerns over food production practices continues to create new public relations tools to build “social license” for conventional agriculture. The Canadian Centre for Food Integrity is doing extensive public opinion research to “Help Canada’s Food System Earn Trust” and their new report is on GMOs: “The goal is to have Canadians no longer be concerned with GMOs.” The report encourages companies, commodity organizations and farmers to spread “key messages” about GMOs – but some of these messages are misleading. Importantly, their list of “11 GMO foods available for public consumption” is different from the list of the 8 GM foods that are actually on the market in Canada. The report’s key messages also say that GMOs reduce the use of pesticides and that there are “zero scientific studies that have found GMOs can compromise our health.” However, our research shows a 199% increase in herbicide sales in Canada since the introduction of GMOs. In addition, there are too few independent studies on GM food safety, and some existing animal feeding tests point to possible problems and the need for more investigation (see our report at www.gmoinquiry.ca/consumers).

Five genetically engineered crops are grown in Canada: corn, canola, soy, white sugarbeet and a small amount of GM alfalfa (which is just used for animal feed). In addition, GM squash and GM papaya could be imported from the US, and GM cotton is also grown in the US. The GM Atlantic salmon is now also on the market. The GM apple is NOT yet sold in Canada but the company Okanaghan Specialty Fruits is currently looking for Canadian foodservice companies to buy its bags of sliced GM non-browning apples. If it is successful, it will mean that GM apples could be in hotels, restaurants, and catering businesses in Canada in the near future. Check www.cban.ca/gmfoods for the list of GM foods on the market and updates. You can also find the details of our research, and information on GM crops around the world in our 2015 GMO Inquiry report. 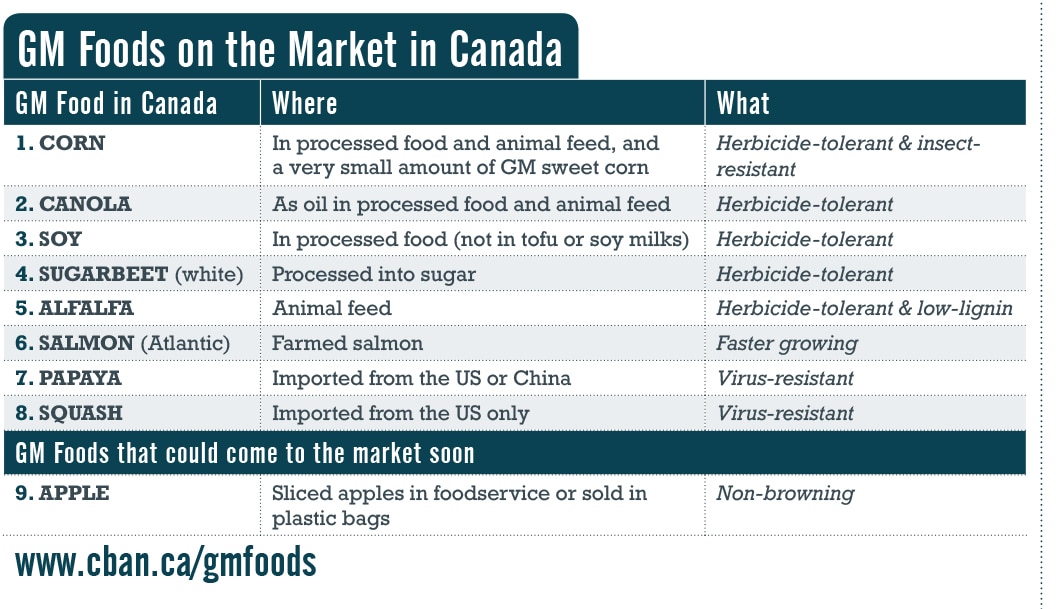 Small amounts of still unlabelled GM salmon have been on the market in Canada (only in Canada) since 2017. These GM salmon were grown by the company AquaBounty at a small pilot plant in Panama that is now closed. The GM fish are now being grown in an on-land factory in Prince Edward Island and at a factory in Indiana, USA. AquaBounty says its first “harvests” of GM salmon from these two new facilities are expected in June 2020. Just this week, the company issued a press release that said, “AquaBounty has always supported clear, transparent labeling of our bioengineered salmon,” though it continues to sell it without any labels for consumers in Canada. Read our factsheet for the latest information.

In response to a request from the youth of the international peasant movement called La Via Campesina, we translated our factsheet on GM salmon into Spanish, for discussion at their Americas youth gathering. This is just one example of how the information CBAN produces is used around the world. We share information back and forth with farmer organizations and the day after we released our report on the GM vitamin-A “Golden Rice”, we got a message of thanks from a farmers’ network in Asia. 2019 also saw the release of the Netflix documentary on gene editing that included the issue of GM mosquitos in Burkina Faso – CBAN provided background research for this documentary.

Even More Herbicides: 2,4-D and Dicamba

Earlier this year, CBAN and Prevent Cancer Now jointly called for a review of the use of herbicide-tolerant crops in Canada. We worked together to submit a response to Monsanto’s request for approval of a GM corn that can withstand applications of both 2,4-D and dicamba. “This proposed GM corn demonstrates the breakdown of herbicide-tolerant crops,” said CBAN’s Coordinator Lucy Sharratt in an August press release. The shift to selling seeds with stacked GM traits that convey tolerance to multiple herbicides at once, is now well underway: In 2017, Monsanto (now Bayer) launched a GM corn that is tolerant to dicamba and glyphosate and DowDupont (now called Corteva) is selling GM corn (2017) and soy (2018) tolerant to 2,4-D and glyphosate. In 2019, Monsanto requested approval for a GM corn that is tolerant to dicamba and 2,4-D / quizalofop as well as glufosinate. Read more at www.cban.ca/pesticides.

We are seeing a lot of news about the new genetic engineering techniques of gene editing, such as CRISPR. CRISPR is a powerful research tool that may lead to new medical treatments (and has already been used by one scientist to genetically engineer human babies), but it is also being used to experiment with new GM plants and animals. The new techniques may make it easier and faster to genetically engineer a wider range of organisms, for more purposes. The biotechnology industry is arguing that the techniques are so precise that the products don’t require risk assessment and regulation. Although this is not a scientifically supportable argument, the industry lobby group CropLife is already pressing the Canadian government to exclude gene editing from existing GMO (novel trait) regulations. Read more at www.cban.ca/gene-editing

The GM apple and GM salmon were both developed by two small companies in Canada, based on university research, but both companies – Okanagan Specialty Fruits and AquaBounty – are now owned by the US biotechnology company Intrexon. Intrexon is largely propped up by billionare investor and Intrexon CEO Randall Kirk. In 2016, he bought 41,830 shares of Intrexon for $1,000,573 and he recently bought even more shares in AquaBounty. Kirk has a 42% stake in Aquabounty at over 9 million shares (8,239,199 owned by him and 837,554 owned by entities controlled by him).

The first GM food animal in the world is a fish – a genetically engineered Atlantic salmon. The salmon is engineered to grow faster and signals the development of GM animals for factory farming. The new genetic engineering techniques of gene editing open the possibility of more GM animals being developed. A new report from Friends of the Earth US discusses how these experiments are likely to focus on producing animals with GM traits that support intensive livestock operations, including fish farming: “Common gene editing traits, such as hornless cows and disease resistance, will perpetuate the poor animal management, such as crowding, often found in Concentrated Animal Feeding Operations (CAFOs). This will magnify the current ethical, health and welfare concerns for animals housed in CAFOs.”

This year, we re-examined the GM Vitamin-A “Golden Rice,” because the product is back in the news after Canada approved it as safe, and because the Government of Bangladesh may soon also approve it. Its ability to deliver sufficient beta-carotene and address Vitamin-A deficiency for populations suffering from malnutrition is not demonstrated. We found that it has low and variable levels of beta-carotene, and the beta-carotene degrades rapidly during storage and cooking. Aside from the question of its technical effectiveness, it is not the solution to the problem of Vitamin A deficiency. The true solution is food sovereignty, and in the meantime there are immediate interventions like supplementation that are working. We wanted to make sure we had the latest information on this GM rice, especially because Canada is now involved. In 2018, Health Canada approved Golden Rice as safe to eat, even though it will not be distributed in Canada. Read our report here.

In March, we published the report “GM Contamination in Canada: The failure to contain living modified organisms,” which documented, for the first time, all the GMO escape incidents in Canada thus far. We published the report with the Organic Agriculture Protection Fund of SaskOrganics, which was established to support organic grain farmers in Saskatchewan when they tried to certify a class action seeking compensation from Bayer and Monsanto because of GM canola contamination. There have been escape incidents in Canada with GM canola, GM flax, and unapproved GM wheat and GM pigs. Since we released our report, there has been another (the fourth) escape incident with GM wheat in the US. In the meantime, Health Canada says it conducted a safety assessment of the GM “Golden Rice” because, even though it is not intended to be sold in Canada, “it may be possible that raw commodity or food products derived from GR2E rice may unintentionally enter Canada via imports from countries of production.” CBAN continues to monitor the government proposal (Low-Level Presence) to legalize unapproved GM food contamination in Canada. Read our report here.

The Ethics of Gene Drives Raised

Gene Drive Organisms (GDOs) are genetically engineered to be released into the wild, to intentionally spread GM traits through an entire population. They are being proposed to replace or remove entire species, such as invasive rodents or disease-carrying mosquitoes. Such applications of genetic engineering raise huge ethical questions: “GDOs may reshape ecosystems, and their developers are claiming they have the authority to redirect evolutionary development. If the removal or alteration of a species by a GDO were to have significant negative ecological or other impacts after several generations, there may be no means for those who experience loss to claim damages and those responsible may lie beyond liability. A far more basic ethical question is whether humans, particularly corporations and governments, have the right to deliberately intervene in evolutionary processes…Many cultures and worldviews, especially among traditional and indigenous societies, have strong objections to engineering the living world and regard protecting ecological balances as being among humanity’s sacred duties.” – from the new report “Gene Drive Organisms: An introduction to a dangerous new technology putting Africans at risk.”