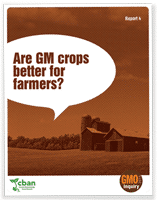 The Canadian government does not assess the agronomic and economic impacts of GM crops or evaluate the benefits or risks they pose, and farmers are not consulted before GM crops are approved for growing.

Yields in GM and non-GM crops have increased at a similar rate in Canada, and there are no clear patterns to show that GM crop yields have increased more than those of non-GM crops. In fact, research comparing GM crops in North America and non-GM varieties of the same crops grown in Europe has shown that non-GM crop yields have increased as much, or more. GM traits are added to plant varieties that are already high- yielding due to background genetics developed through non-GM breeding methods. It is these pre-existing characteristics, along with other factors, that have determined yield increases in the past decades, not GM traits.

Growing GM crops is not putting more money into the pockets of Canadian farmers. Although gross farm income in Canada has increased over the past two decades, realized net income (the income remaining after farm expenses are paid) has not changed significantly. Farm expenses have increased substantially, in part because of the rising prices of seeds and other inputs. GM crops have fed into this pattern; GM seeds are significantly more expensive than non-GM seed, in Canada and other countries.

The major benefit that GM herbicide-tolerant crops offered farmers was simplified weed management. However, the increased use of herbicides has led to the emergence and spread of herbicide- resistant weeds, which are reversing this benefit and creating new costs and complications for farmers.

GM contamination can also present serious costs for farmers. The examples of GM flax contamination, which closed Canada’s export markets, and GM canola contamination, which meant that most Canadian organic farmers were forced to stop growing canola, stand testament to these costs. Despite these experiences, new GM crops such as the GM alfalfa are being commercialized. If released in Canada, GM alfalfa contamination will have serious and irreversible impacts, the brunt of which will be borne by organic and other non-GM farmers.