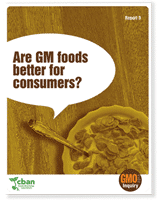 This third CBAN report tackles the questions that Canadian consumers are still asking, twenty years after the government approved the first genetically modified organisms (GMOs) for human consumption. GM foods have been allowed onto grocery store shelves in Canada (and the US) without labels, without meaningful public debate, without government testing, and without long-term animal feeding studies.

Although launched with many promises of benefits to consumers, two decades later GM foods on the market are not cheaper, tastier, fresher, more nutritious, or more environmentally-friendly. In fact, the use of GM crops has increased rather than decreased the use of synthetic herbicides, with broad environmental and health consequences that are not being evaluated.

There is no mandatory labelling of GM foods in Canada (or the US), despite twenty years of polling that shows an overwhelming majority of Canadians want GM foods labelled. The latest poll, commissioned by CBAN in 2015, confirms that 88% of Canadians want mandatory labelling. In Canada, the public call for labelling was particularly intense leading up to the 2001 defeat of the mandatory labeling bill C-287. This report examines industry efforts to ensure that this bill was defeated, and the investments made by the federal government to reassure Canadians that GM foods are safe.

Even after twenty years, the scientific literature on GM food safety is inconsistent and far from robust, leaving more questions than answers. Independent studies on human health questions are rare and long-term animal feeding tests are rarer still. The studies that do exist indicate that some genetic modification could result in toxic effects, allergic responses, or altered nutrition, and clearly point to a need for further research. Moreover, there is no monitoring of GM foods which means we do not know if the foods we have been eating for the past twenty years have had any health impacts.

Globally, there is very little independent science on GM food safety questions, partly because governments are content to rely on corporate science to assess the safety of new GM foods. Barriers to conducting independent science include funding and access to GM seeds for testing. The high stakes involved in commercializing new GM products have added to an environment that is hostile to critique, from the public and even from within the scientific community.

The potential risks from eating GM foods have not been fully investigated and there is no scientific basis to conclude that GM foods are safe.

Releasing GMOs into our food system and environment remains an ongoing experiment, still in need of testing and evaluation.