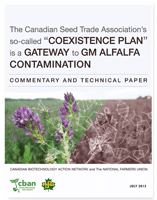 The Canadian Seed Trade Association’s “coexistence plan” is designed to provide industry cover to the release of GM alfalfa. The plan is not realistic – science already tells us that containment is not possible. The coexistence plan suggests unrealistic practices for farmers that they may be unable to implement, and which certainly could not be maintained by all farmers, in every instance, in perpetuity. For example, the plan relies heavily on good communication and “mutual respect” between neighbours, which, though a goal to strive towards, is highly variable and unpredictable in reality. Similarly, the plan does not recognize the real constraints that farmers face in suggested containment measures such as cleaning out equipment to remove every last tiny alfalfa seed. The plan does not address the fact that even if the probability of contamination were, as it claims, very low (which it isn’t), a low probability is still a probability. If even a single one of the proposed practices fails, contamination cannot be undone, flowers cannot be un-pollinated, and GM alfalfa cannot be taken back. This is a very limited risk reduction plan, not a coexistence plan.