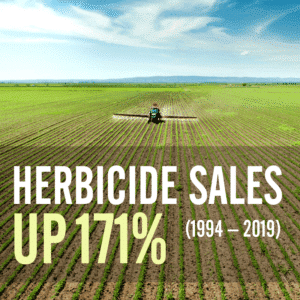 The biotechnology industry promised that genetically modified (GM, also called genetically engineered) crops would reduce the use of pesticides in farming. Instead, herbicide use has increased with the use of GM crops. CBAN’s research found that herbicide sales in Canada have increased by 171% since GM crops have been introduced, between 1994 and 2019. This number is an update from the details in our report “Are GM crops better for the environment?”

100% of the GM crops grown in Canada are now herbicide-tolerant. Globally, this number is 88%.

April 2022: Canada’s Ministers of Health, Environment and Climate Change, and Agriculture and Agri-Food have launched a “transformation” of the Pesticide Management Regulatory Agency. The transformation will be built on 4 pillars of action: improved transparency; increased use of real-world data and independent advice; strengthened human health and environmental protection through modernized pesticide business processes; and targeted review of the Pest Control Products Act.

December 31, 2020: Mexico published a final decree that calls for a phase-out of use of both the herbicide glyphosate and genetically modified (GM or genetically engineered) corn for human consumption in Mexico. The decree states that use of glyphosate will be phased out over the next four years and also calls for the revocation of existing and future permits for GM corn cultivation and consumption. Click here for information and the unofficial translation from the US government.“…with the objective of achieving self-sufficiency and food sovereignty, our country must be oriented towards establishing a sustainable and culturally adequate agricultural production, through the use of agroecological practices and inputs that are safe for human health, the country’s biocultural diversity and the environment, as well as congruent with the agricultural traditions of Mexico.”

2020: Dicamba and 2,4-D levels in rainwater related to GM herbicide tolerant crops: Preliminary results show that dicamba was detectable in rainwater throughout the season at some sites in the southern corner of Missouri. The dicamba amounts in the rain were high enough to injure sensitive crops, especially with multiple exposures. The results directly correlated with adoption rates of Bayer’s Roundup Ready Xtend dicamba-tolerant crops. Where adoption was higher, dicamba was more frequently detected in the rainwater, and at higher rates. Data from nearby weather stations also indicated that lack of wind and inversion conditions likely influenced dicamba’s presence in rainwater.

June 2020: A U.S. court overturned the registration of the herbicide dicamba, because of the “enormous and unprecedented” damage to neighbouring crops from pesticide drift. The court ruling means that three dicamba formulations – sold by Monsanto (Bayer), BASF, and Corteva (Dow-Dupont) – are now illegal, and their associated genetically engineered (genetically modified or GM) dicamba-tolerant seeds are irrelevant. However, the U.S. Environmental Protection Agency (EPA) –  the regulator responsible for allowing registration – has responded by allowing U.S. farmers to use up their existing stocks of dicamba. In 2017, Monsanto (now Bayer) introduced a new dicamba formulation to be sold along with the company’s new GM dicamba-tolerant seeds. About two-thirds of the soybeans and three-quarters of the cotton planted by U.S. farmers is now dicamba-tolerant.

Data from the Food and Agriculture Organisation of the UN (FAO) and subsequent Health Canada data shows that herbicide sales in Canada increased by 171% between 1994 and 2019 (lastest data available as of April 2022). The first genetically engineered herbicide-tolerant crops were introduced in 1995. 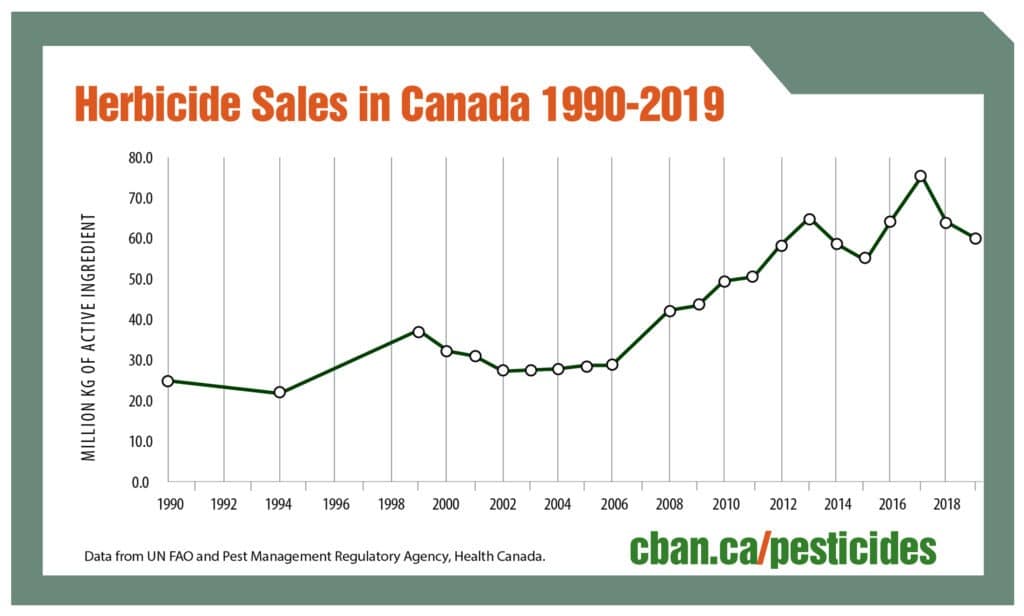 August 2019: The Canadian Biotechnology Action Network (CBAN) and Prevent Cancer Now (PCN) are calling for a review of the use of genetically engineered (genetically modified or GM) herbicide-tolerant crops in Canada, in response to Monsanto’s request for government approval of GM corn MON 87429 that can withstand applications of four herbicides, including 2,4-D and dicamba.

May 2022: The Brazilian Agricultural Research Corporation (Embrapa) and Fundação Meridional have launched the first soy with Bayer’s Xtend® (XTD) technology in Brazil (BRS 2553XTD and BRS 2558XTD), tolerant to glyphosate and dicamba herbicides.

Glyphosate is a “probable human carcinogen”

In 2015, the International Agency for Cancer Research (IARC) of the World Health Organization (WHO) concluded that:

Three court cases in the US have found Monsanto liable for the cancer risk of its glyphosate-based herbicides. Court documents show:

For details and updates, follow the Monsanto Roundup Trial Tracker from U.S. RIght to Know

May 2019: A Saskatchewan farmer in his late 50s who is diagnosed with non-Hodgkin’s lymphoma is leading a class action lawsuit against Bayer and Monsanto, contending that exposure to Roundup herbicide contributed to his cancer and that of others, and that Monsanto (now Bayer) withheld information about the safety of its herbicide. “Sask. farmer leads class action glyphosate lawsuit“, The Western Producer, May 15, 2019

May 2019: A California jury ordered Monsanto to pay just over $2 billion in punitive and compensatory damages to a married couple who both developed non-Hodgkin lymphoma they say was caused by their many years of using Roundup products. The ruling includes punitive damages, which means the jury found that Monsanto “engaged in conduct with malice, oppression or fraud committed by one or more officers, directors or managing agents of Monsanto”  who were acting on behalf of the company.

“This case is way bigger than me. I hope it gets the attention that it needs.”
– Dewayne Johnson, former school groundskeeper awarded $78 million from Monsanto

November 2018: A judge has cut the $289 award to Dewayne “Lee” Johnson down to $78 million. However, the judge did not overturn the decision (see below) as she indicated she might, after jurors in the initial case wrote to defend their ruling and process.

August 2018: A California jury reached a verdict in a personal liability lawsuit against Monsanto, in the case of Dewayne Johnson, finding that Monsanto’s glyphosate product, Roundup, caused a school groundskeeper’s terminal non-Hodgkin lymphoma. The jury not only found that Roundup caused the plaintiff’s cancer, awarding him $39.3 million in pain and suffering and economic damages, but also that Monsanto acted “with malice or oppression” and awarded an additional $250 million in punitive damages. Read the article in The Guardian “One Man’s Suffering Exposed Monsanto’s Secrets to the World” by Carey Gillam.

The United Nations Food and Agriculture Organization (FAO) reports that 21.9 million kilograms of herbicides were sold in Canada in 1994. Health Canada’s annual reports show that this number has steadily increased since then, and by 2017, had increased by 243%.

Glyphosate is the top pesticide ingredient sold in Canada. It is also the top agricultural herbicide ingredient, followed by glufosinate ammonium, MCPA and 2,4-D. Glyphosate use in Canada tripled between 2005 and 2011, climbing from 30.2 million litres to 89.7 million in Western Canada, and from 3.8 million litres to 12.3 million in Eastern Canada.

GM insect-resistant (Bt) crops have reduced insecticide use in some countries. The Canadian government has not monitored the impact of Bt crops on insecticide use in Canada. However, insects are beginning to develop resistance to Bt crops in the US and other countries, and farmers are turning to other insecticide applications to control them. Additionally, Bt plants themselves produce insecticidal toxins that are released into the environment.

The use of herbicides with herbicide-tolerant crops reduces weed diversity in and around fields, which in turn reduces habitat and food for other important species, including the Monarch butterfly (see below). Studies have also observed that GM insect-resistant crops can also have negative impacts on non-target insects, including pollinators, and soil and water organisms.

From Pesticides and Our Health, Greenpeace, 2015:

Synthetic pesticides have been widely used in industrial agriculture throughout the world since the 1950s. Over time, many of these chemicals have become extremely pervasive in our environment as a result of their widespread repeated use and, in some cases, their environmental persistence. Some take an extremely long time to degrade, such that even those banned decades ago, including DDT and its secondary products, are routinely found in the environment today.

As a consequence of this persistence, and potential hazards to wildlife, effect-related research on the impact of pesticides has increased exponentially over the past 30 years. It is now clear that these effects are wide and varied. Over the same period, scientific understanding of the effects of pesticides on human health and their mechanisms of action has also expanded rapidly, with studies revealing statistical associations between pesticide exposure and enhanced risks of developmental impairments, neurological and immune disorders and some cancers.

Nevertheless, proving definitively that exposure to a particular pesticide causes a disease or other condition in humans presents a considerable challenge. There are no groups in the human population that are completely unexposed to pesticides, and most diseases are multi-causal giving considerable complexity to public health assessments. Furthermore, most people are exposed to complex and ever changing mixtures of chemicals, not just pesticides, in their daily lives, through multiple routes of exposure. Pesticides contribute further to this toxic burden. 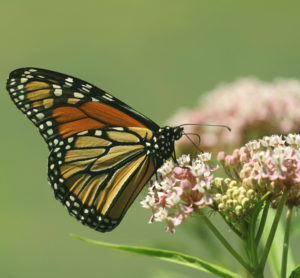 found that milkweed plants, which are the main source of food for Monarch butterflies, were contaminated with 64 types of pesticide residues. Monarch butterfly populations have shrunk to 1% of their numbers in the last 3 decades. “We expected to find some pesticides in these plants, but we were rather surprised by the depth and extent of the contamination,” said Matt Forister, a butterfly expert, biology professor at the University of Nevada, Reno and co-author of the paper. “From roadsides, from yards, from wildlife refuges, even from plants bought at stores – doesn’t matter from where – it’s all loaded with chemicals. We have previously suggested that pesticides are involved in the decline of low elevation butterflies in California, but the ubiquity and diversity of pesticides we found in these milkweeds was a surprise.”

In 2015, a report from the Center for Food Safety found that spraying of glyphosate on genetically engineered crops in the US had greatly reduced milkweed populations in and near farm fields. The loss of this vital habitat and food source had, in turn, decimated the population of the Monarch butterfly.

Pollinators are also affected by other pesticides, such as neonicotinoids. A 2015 factsheet, the Hidden Costs of Toxic Seed Coatings: Insecticide Use on the Rise, describes studies that found that a group of insecticides called neonicotinoids (abbreviated as “neonics”) are likely to be an important cause of declining pollinator populations and poor pollinator health. Neonics are the most widely used insecticides in the world, and have been repeatedly shown to have lethal and sub-lethal effects on beneficial insects.

Synthetic pesticides are not permitted for use in organic food production. Here is more information on the organic standard in Canada.

Organizations with up-to-date information on pesticide toxicity and related issues: