“Corporations should not be able to control people, seeds, plants, and food through patent law.” – Percy Schmesier, 2007. 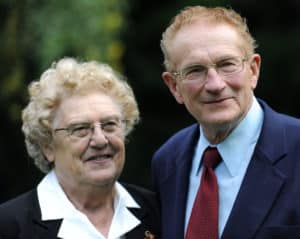 Monsanto’s GM canola was found in Schmeiser’s field but he had never paid for the right to grow it, and he said the seeds blew onto his field in the wind. The case went all the way to the Supreme Court of Canada which, in a 5-4 decision (2004), ruled that Percy was guilty of having Monsanto’s patented genetic sequence in canola on his land, and of not having advised Monsanto to come and remove the GM plants. The court held that Monsanto had the right to their patented genetic material, even though the company could not prove how it got onto the farm. In this case, the courts were not ruling on the question of liability for accidental contamination. The case did, however, confirm that the patent over a genetic sequence applies to the whole organism that hosts it. Read “The Implications of the Percy Schmeiser Decision” by E. Ann Clark.

In 2007, Percy and his wife Louise were awarded the Right to Livelihood award “for their courage in defending biodiversity and farmers’ rights, and challenging the environmental and moral perversity of current interpretations of patent laws.” 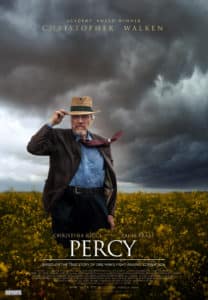 The story of Percy’s fight with Monsanto is fictionalized in the 2020 feature film “Percy”, starring Christopher Walken as Percy, released in theatres just days before his death.

You can also watch this short 2005 Canadian documentary that includes footage of Percy’s reaction to the Supreme Court ruling and explanations of the case (beginning at 9 minutes in).

“The work will continue against these corporations. You cannot fight a battle alone.” – Percy Schmeiser, 2005

“I never met a man like him that could face the challenges that he did and withstand it and still … be the jovial person that he was. It is an inspiration about Percy, not just standing up for oneself, but to meet our burdens and challenges with enthusiasm.” – Terry Zakreski, Percy’s longtime lawyer, from the CBC story about Percy Schmeiser, October 14, 2020.

The Supreme Court handed down their decision yesterday and I have mixed emotions to it. I have received many phone calls and emails from concerned supporters and friends and I appreciate this very much. It was a personal victory and I want to thank my lawyer Terry Zakreski for his dedication and perseverance on my behalf. On the broader issues of my case, I regret that things did not work out for my supporters.

I believe that Monsanto will have a hard time in pursuing patent infringement against other farmers. They are now going to have to prove that a farmer profited from having RR canola in their field. The Court noted that my profits were the same whether I had conventional canola or RR canola, so I find it hard to see how Monsanto can say in any future case that the farmer made more money because of their product. This decision may have removed the “teeth” from their patent.

I also believe that Monsanto will face huge liability issues down the road. The Court determined that they have ownership to the plant and that I infringed by having it in my field. With ownership comes responsibility and I assume more lawsuits will be filed against them for the contamination of farmer’s fields. I was always concerned about this lack of responsibility that Monsanto took for the unconfined release of RR canola in western Canada. I think the Court’s decision will force them to be held accountable for it now.

On the bigger issue of whether or not their patent was valid, the Court ruled that it is, and we have to accept that judgment. For this to be changed our Parliament will have to act. We have a conflict between plants breeder’s rights and patent law and the government will have to sort that out. All I did was save my seed from year to year. Now it is clear that a company’s patent will take precedence over the rights of farmer’s to save and reuse their seed.

Farmer’s should be concerned about this judgment as they now may lose their ability to continue with this practice. I believe that this ruling is an injustice and Parliament must act to ensure that farmer’s rights are protected. The playing field between farmer’s rights and the bio-tech companies rights has been tilted towards the companies with this decision.