“Intellectual property” refers to a group of laws – such as patents, Plant Breeders’ Rights, copyright, trademarks and trade secrets – intended to protect inventors and artists from losing control over their intellectual creations/ideas. Intellectual property has become a powerful tool for corporations to create monopolies and consolidate market power. Monopoly control over plants, animals and other life forms jeopardizes world food security and threatens to increase the economic insecurity of farming communities.

Controlling access to the patent pool means that the company is in an extremely strong market position. Announced as a way of making patent law more ‘democratic’ by organising access to the patented technology, this is, in actual fact, a strategy to control competitors and to perpetuate a predominant market position. While it is still possible for other big companies, such as Bayer (Monsanto), to directly obtain licences independently of ‘the Corteva group’, this is hardly possible for most of the smaller breeders.

Monopolistic claims on patented technology and possible implications for competition associated with the introduction of New GE in plant biotechnology, make disruptive processes in plant breeding, agriculture and food production highly likely. This development is in strong contradiction to repeatedly voiced arguments stating that CRISPR/Cas technology would be cheap, and therefore more accessible for smaller and medium sized breeding companies

From Testbiotech: New GE and food plants: The disruptive impact of patents on breeders, food production and society, June 2021

“Intellectual property” refers to a group of laws – such as patents, Plant Breeders’ Rights, copyright, trademarks and trade secrets – intended to protect inventors and artists from losing control over their intellectual creations/ideas. Intellectual property has become a powerful tool for corporations to create monopolies and consolidate market power. Monopoly control over plants, animals and other life forms jeopardizes world food security and threatens to increase the economic insecurity of farming communities.

Patent protection over new genetic sequences is one legal mechanism that takes ownership of seeds out of the hands of farmers. A patent is granted to an inventor to allow them to make a profit from their work by excluding others from making, using, importing and selling it for a set period of time, usually fifteen to twenty years. Although Canada does not permit the patenting of plants themselves, new genetic sequences in plants can be patented, and patent-holders can stipulate the conditions under which the patented genetic material can be used. In practice, this means that patents allow the company that has developed a GM trait to forbid farmers from saving and replanting seeds with that trait, and public breeders from further selecting or developing it.

Patents also mean that farmers can be found in violation of intellectual property rights if seeds or plants with patented gene sequences are found on their farms. Companies such as Monsanto monitor compliance by conducting “field checks” on farmers’ fields, and encouraging farmers to report possible cases of patent infringement, or what Monsanto calls “seed piracy.” As farmers in Canada and the US have discovered, this can mean being taken to court. By 2013, Monsanto had more than 1,676 patents on seeds, plants and other agricultural applications, and had filed at least 144 seed patent infringement lawsuits in the US, involving 410 farmers and 56 small businesses in 27 states.

In the pursuit of controlling farmer access to their GM technology, companies have also developed “Terminator” technologies (Genetic Use Restriction Technologies) that could provide biological patent enforcement. Such GM technologies make seeds sterile after first harvest. Terminator technology was jointly developed by the US. Department of Agriculture and seed company Delta & Pine Land (subsequently bought by Monsanto). In response to global farmer protests, there is an international moratorium on field-testing and commercializing Terminator technology, at the UN Convention on Biological Diversity. This moratorium is constantly under threat. 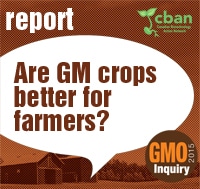 Large seed companies with GM investments spend billions of dollars on patents and patent lawyers, and on policing farmers. This system of legal controls, along with possible biological controls, exists to turn seeds into commodities that corporations can profit from, and take seeds out of the hands of farmers. For references and more information see CBAN’s report “Are GM Crops Better of Farmers?”

In 2007, Canadian farmer Percy Schmeiser and his wife Louise were given the Right to Livelihood Award “… for their courage in defending biodiversity and farmers’ rights, and challenging the environmental and moral perversity of current interpretations of patent laws”. In 1998 Percy Schmeiser and his wife received a letter from Monsanto claiming that they had used Monsanto’s genetically engineered canola seeds without a license. However, the Schmeisers had never bought Monsanto’s seed. Instead, Percy Schmeiser said that some of Monsanto ‘Round-up Ready’ genetically modified canola seeds had blown on to their land from passing trucks. Monsanto sued the Schmeisers for ‘infringement of patent’, seeking damages totalling $400,000, including about $250,000 in legal fees, $105,000 in estimated profits from the Schmeisers’ 1998 crop, $13,500 ($15 an acre) for technology usage fees and $25,000 in punitive damages. At the same time, Monsanto offered to withdraw the legal challenge if the Schmeisers signed a contract to buy their seeds from Monsanto in the future and to pay the “Technology use fee”. But the Schmeisers contested the case all the way up to the Supreme Court of Canada: the final ruling supported Monsanto in the company’s claim to own the gene however, the court also concluded that Schmeiser should not have to pay anything to Monsanto because they had not in any way benefited from having the seeds on their property. For more information see: In Memoriam: Percy Schmeiser. Saskatchewan farmer Percy Schmeiser died at 89, on October 14, 2020. “Corporations should not be able to control people, seeds, plants, and food through patent law.”

Biopiracy, a term originally coined by ETC Group, refers to the appropriation of the knowledge and genetic resources of farming and indigenous communities by individuals or institutions that seek exclusive monopoly control (patents or intellectual property) over these resources and knowledge. ETC Group believes that intellectual property is predatory on the rights and knowledge of farming communities and indigenous peoples. Through nanotechnology- and synthetic biology-related patents, intellectual property claims are now being extended to elements of the periodic table and to key metabolic pathways involved in cellular functioning (and resulting in natural products with high commercial value).