Each genetically modified (GM or genetically engineered) food on the market in Canada has been assessed for safety by government regulators inside Health Canada. Health Canada does not conduct its own tests on GM foods but relies on information provided by the companies that want approval for their products. This information is not public. 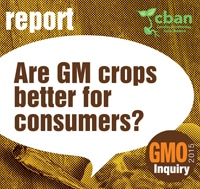 There is no scientific consensus on the safety of GM foods. The potential risks from eating GM foods have not been fully investigated and there is no scientific basis to conclude that GM foods are safe. Releasing GMOs into our food system and environment remains an ongoing experiment, still in need of testing and evaluation.

Globally, there is very little independent science on GM food safety questions, partly because governments are content to rely on corporate science to assess the safety of new GM foods. Independent studies on human health questions are rare and long-term animal feeding tests are rarer still. The studies that do exist indicate that the process of genetic engineering could result in toxic effects, allergic responses, or altered nutrition. These studies point to a need for further research. Moreover, there is no monitoring of GM foods which means we do not know if the foods we have been eating for the past twenty years have had any health impacts. The scientific literature on GM food safety is inconsistent and far from robust, leaving more questions than answers.

We do not know what, if any, impacts eating genetically engineered foods will have on our health. There are many indications that we do not know enough to be integrating GE foods into our diets. Additionally, there is no mandatory labelling of GE ingredients in Canada and there is no post-market surveillance to help us determine if there are already impacts. In the interests of public health, the precautionary principle needs to be applied in relation to introducing GE foods.

“We are performing a massive experiment. The results will only be known after millions of people have been exposed to (these foods) for decades…Any politician or scientist who tells you these products are safe is either very stupid or lying. The hazards of these foods are uncertain. In view of our enormous ignorance, the premature application of biotechnology is downright dangerous.“
– David Suzuki quoted in The Globe and Mail, October 20, 1999.

GE foods are approved for human consumption based on industry-produced science that is not peer-reviewed and cannot be accessed by the public or independent scientists. Peer review is the process whereby independent scientists assess the work of others – it is a fundamental and defining practice of science. As the Royal Society of Canada Expert Panel on the Future of Food Biotechnology states, “peer review and independent corroboration of research findings are axioms of the scientific method, and part of the very meaning of the objectivity and neutrality of science.” (p. 214 ) Without peer review, the data used to approve products cannot be assumed to be good science, or indeed “science” at all.

There are many scenarios for risks to human health given the lack of certainty involved in the science of genetic engineering. In their research, genetic engineers continually encounter unintended side effects — plants create toxins, react to weather differently, contain too much or too little nutrients, become diseased or malfunction and die.

No scientific consensus on safety of genetically modified organisms: An international group of 93 scientists, academics and physicians have issued a statement asserting that there is no scientific consensus on the safety of GM foods and crops. The statement was made in response to sweeping claims that GM crops and foods are safe. In reality, many unanswered questions remain and in some cases there is serious cause for concern. The statement draws attention to the diversity of opinion over GMOs in the scientific community and the often contradictory or inconclusive findings of studies on GMO safety. The scientists conclude:

“Whether to continue and expand the introduction of GM crops and foods into the human food and animal feed supply, and whether the identified risks are acceptable or not, are decisions that involve socioeconomic considerations beyond the scope of a narrow scientific debate and the currently unresolved biosafety research agendas. These decisions must therefore involve the broader society. They should, however, be supported by strong scientific evidence on the long-term safety of GM crops and foods for human and animal health and the environment, obtained in a manner that is honest, ethical, rigorous, independent, transparent, and sufficiently diversified to compensate for bias.

Decisions on the future of our food and agriculture should not be based on misleading and misrepresentative claims that a “scientific consensus” exists on GMO safety.”

A new study (Mesnage et al.), using new molecular profiling method, has found that Monsanto’s genetically engineered herbicide-tolerant corn event called NK603 is not “substantially equivalent” to non-GM corn. The concept of substantial equivalence is used as a guide in government safety assessments of GM foods. The GM trait NK603 is used in many corn varieties grown across Canada, and ends up in processed food ingredients and animal feed. Health Canada approved the GM corn event called NK603 in 2001.

The study is: Mesnage R, Agapito-Tenfen S, Vilperte V, Renney G, Ward M, Séralini GE, Nodari N, Antoniou MN. An integrated multi-omics analysis of the NK603 Roundup-tolerant GM maize reveals metabolism disturbances caused by the transformation process. Scientific Reports, 2016; 6:37855. Open access: http://www.nature.com/articles/srep37855 The molecular profiling undertaken ishows that NK603 and its isogenic control are not substantially equivalent. Analyses of the proteomics and metabolomics revealed major differences between NK603 corn and its non-GM counterpart. A total of 117 proteins and 91 metabolites were found to be significantly altered by the genetic transformation process. Notably, the study found alterations in the levels of enzymes of glycolysis and TCA cycle pathways; changes in proteins and metabolites of glutathione and increases in the amounts of numerous polyamines. The study discusses that, “the nutritional quality of GM feed might be hampered by metabolic imbalances related to plant energy and stress metabolism.”

The study found biological differences between the GM and non-GM corn but any toxicological effects of these differences is unknown (their toxicological relevance is unclear) and were not part of the study. This question is now before Health Canada.

The Canadian Biotechnology Action Network wrote a letter to Health Canada (December 22, 2016) to ask the department to examine the implications of this study and to:

Health Canada responded to CBAN (March 1, 2017) that “none of the pathways or individual metabolites identified as statistically significantly altered by Mesnage and colleagues is clearly associated with toxin or allergen production, nor do they point to changes in nutrient level or composition.”

The Canadian Biotechnology Action Network (CBAN) is calling on Health Canada to place a moratorium on approving new genetically modified (GM) foods, to re-evaluate the safety of GM foods already on the market, and to initiate a complete overhaul of the regulatory system. The call comes in response to the republication of a long-term study of a GM corn that exposes a lack of scientific rigour in Canada’s regulatory system.

The long-term safety test on GM corn was conducted by a team of scientists in France, led by Caen University molecular biologist Giles-Éric Séralini. It was first published in September 2012 in the peer-reviewed journal Food and Chemical Toxicology, which then retracted the paper in November 2013. The paper is now published in Environmental Sciences Europe. The research team has now also released their raw data.

In 2012 (October 25 http://www.hc-sc.gc.ca/fn-an/gmf-agm/seralini-eng.php ), Health Canada and the Canadian Food Inspection Agency responded to the Séralini et al. study as published in September 2012 in Food and Chemical Toxicology, saying: “The methodology used was inadequately described, the full data set was not presented, and the data that was reported was not presented in a transparent manner. Furthermore, the statistical methods used by the authors to analyse the data were judged to be inappropriate. These limitations make the validity of the study results difficult to determine.” At that time the departments stated: “To permit further comprehensive analysis, Health Canada and the CFIA have requested the complete set of raw data from the study authors.” The Séralini team has now released their raw data. The departments maintain that, “whenever new information concerning the safety of an authorized product arises, this new data is carefully reviewed.” CBAN now calls on these departments to review the data and release a revised opinion of the study.

Communications on the retraction (2013):

The first-ever study of mixed GM feed on pigs – a long-term toxicology study published June 2013 – observed negative health impacts. The study’s authors – Dr Judy Carman, Adelaide Australia, et al. – conclude that “Pigs fed a GMO diet exhibited heavier uteri and a higher rate of severe stomach inflammation than pigs fed a comparable non-GMO diet. Given the widespread use of GMO feed for livestock as well as humans this is a cause for concern. The results indicate that it would be prudent for GM crops that are destined for human food and animal feed, including stacked GM crops, to undergo long-term animal feeding studies preferably before commercial planting, particularly for toxicological and reproductive effects. Humans have a similar gastrointestinal tract to pigs, and these GM crops are widely consumed by people, particularly in the USA, so it would be be prudent to determine if the findings of this study are applicable to humans.”

Low Level Presence (LLP) is a policy to accept contamination of our food system with a low level of genetically modified (GM) foods that have not been approved by Health Canada as for safe human consumption. This would allow GM foods to contaminate imports to Canada even if they have not yet been approved as safe by Canadian regulators, but have been approved as safe in at least one other country that is deemed trustworthy by Health Canada (conforms to international Codex guidelines). The federal government argues that this “low level” of contamination from unapproved GM foods is not harmful. Click here for more details and background on LLP from CBAN.

August 2019: Read Health Canada’s response to our letter expressing concern over an LLP policy that would remove the role of Health Canada as safety evaluator for GM foods (June 2019). This concern was raised by CBAN in testimony and a written brief to the House of Commons Standing Committee on Agriculture and Agri-Food which concluded its study on the “Public perception of and public trust in the Canadian agricultural sector” without making any recommendations.

Press Release – July 7, 2015: Canada Close to Allowing Unapproved GM Food Contamination in Imports The Canadian government wants to allow 0.2% or higher of our food to be contaminated with genetically modified (GM) foods that have not been approved by Health Canada for safe human consumption. The GM foods will contaminate imports to Canada and will have been approved for safety in at least one other country, but not yet approved as safe by our own regulators. The federal government calls this “Low Level Presence” or LLP and argues that this “low level” of contamination from unapproved GM foods is not harmful. Click here for more information.