GM goats at the Ottawa Museum

“Seeing the transgenic goats gave me a horrible, sick feeling inside. I just think it’s wrong,” said Beatriz Oliver, who brought her four-year-old daughter and two-and-a-half-year old son to the farm on Saturday not knowing the GM goats were at the museum, “I was glad they’re too young to read the signs. I didn’t want to have to tell them that someone put spider DNA into these goats. It’s unethical and unnecessary.”

Two genetically engineered (also called genetically modified or GM or – in this case, transgenic) goats were put on display at the Canada Agriculture Museum, Central Experimental Farm in Ottawa. The GM goats are displayed with the sign “Spider (Transgenic) Goats” because they were genetically modified with genetic material from spiders, to create a silk that can be extracted from their milk to make textiles such as bulletproof vests. The final product is trademarked “BioSteel” but is not commercialized. 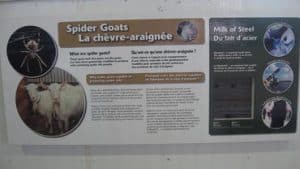 Display sign for “Spider Goats” and “Milk of Steel”

Display signs at the museum said: “What are spider goats? These goats look like goats, act like goats, but have been genetically modified to produce milk containing spider silk proteins”. The display showed that the silk from the GM goats could be used to make bulletproof vests, fishing line or medical sutures. The display did not mention that the company that developed the technology does not exist anymore or that the GM silk is not being produced anywhere in the world.