In response to questions from vegetable growers who want to confirm the information they use to avoid planting genetically engineered (genetically modified or GM) sweet corn seeds, the Canadian Biotechnology Action Network (CBAN) has compiled the following information.

There are no GM vegetables grown in Canada except for GM sweet corn, and GM sweet corn is not prominently advertised to smaller growers. Because of this, some vegetable growers are not familiar with common GM seed identifiers that grain and oilseed growers frequently see in seed catalogues.

Recent years of tests conducted by CBAN and Vigilance OGM have shown little or no GM sweet corn present in Canada.

However, approximately 80% of grain corn is GM. For information on the use of GM corn for grain in Canada and further information about the proliferation of GM sweet corn, see our report “Where in the World are GM Crops and Foods?” 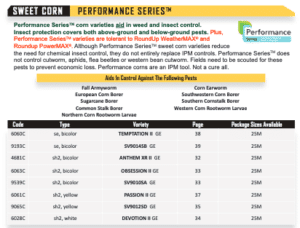 All the GM sweet corn seeds on the market are both insect resistant and herbicide tolerant:

See the Ontario government’s list of Bt corn seeds/events on the market in Canada (April 2020).