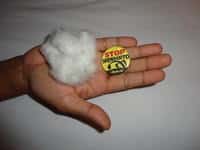 Cotton is genetically engineered to produce a toxin that kills the bollworm, one of cotton’s primary pests. This pest-resistant cotton is engineered with a gene from the bacteria Bacillus thurengiensis or “Bt,” and is called Bt cotton. Some GM cotton is stacked with both herbicide resistance and insect resistance traits.

2020: A new report from the Textile Exchange Pan-Africa Sourcing Working Group, “Cotton in Africa: Sustainability at a Crossroads,” outlines the risks if African governments adopt and scale up GM cotton production, and urges policymakers in Africa to support organic and other production methods that prohibit genetic modification.

Currently, seven countries in Africa allow GM cotton production, four do not, and many others are undecided.

“With relatively little penetration of GM cotton, African countries have an opportunity to learn from other countries’ experiences of GM technology and weigh the pros and cons,” says Liesl Truscott, Textile Exchange Director of European and Materials Strategy and Coordinator of the Working Group. “Demand for organic and other non-GM cotton continues to increase and, keeping in mind the genetic biodiversity and resilience that local seed varieties can offer, we hope this report creates food for thought for decision-makers at all levels. In the journey toward regenerative organic fiber production, it is vital for countries to allow for GM-free cotton initiatives based on organic practices and the precautionary principle to flourish.”

Burkina Faso: In 2016, cotton companies in Burkina Faso decided to phase out all cultivation of Monsanto’s Bt cotton in the country, after cultivating it since 2008. The quality of cotton fiber of the Bt cotton was not up to the standards of the country’s high quality fibre. The new cotton did not fetch the same price, and the sellers had trouble selling the cotton. In fact, before Bt cotton was introduced, 90% of the country’s cotton was classified as high quality, medium-long staple cotton, while in the years after the introduction of Bt cotton, only 20% met this standard. Monsanto paid nearly $3-million in compensation for the reduced quality in 2010-2011.

Read a report from African Centre for Biodiversity, June 2015. “GM cotton has impoverished smallholder farmers due to the expense of the technology coupled with inevitable technological failures…African governments must think twice before burdening smallholders with bigger debts, onerous crop management techniques and the risk of crop failures.”

“Farmers have no control over this technology, which makes us extremely dependent. I am convinced that farmers will ultimately abandon GM cotton because it wasn’t designed to serve our interests,” said Issouf Sanou, Coordinator of the Burkina National Federation of Farmer Organizations in a CBAN press release February 25, 2013.

CBAN is working in solidarity with farmer groups in Sudan, West Africa and India.

Cotton is an important cash crop in India. It is grown on 12 million hectares, making India the second largest producer of cotton in the world, behind China. Insect-resistant GM (Bt) cotton is the only GM crop currently grown in India. It was introduced in India by Monsanto in 2002, under the trade name Bollgard, in a joint venture with the Indian seed company Mahyco.

In the first few years after Bt cotton was commercialized in India, some farmers saw the benefits of reduced pesticide use and fewer crop losses, but this pattern quickly and dramatically changed.

March 2020: A long term study, published in the journal Nature Plants, and spanning 20 years of Bt cotton production in India, shows that while Bt cotton in India has helped control one major cotton pest, “with Bt resistance in another pest and surging populations of non-target pests, farmers now spend more on pesticides today than before the introduction of Bt.” According to one of the co-authors of the study, Glenn Stone, “Now farmers in India are spending more on seeds, more on fertilizer and more on insecticides…Our conclusion is that Bt cotton’s primary impact on agriculture will be its role in making farming more capital-intensive — rather than any enduring agronomic benefits.” Read more about the study here.

November 2018: A review article in the journal Current Science from world-renowed geneticist and “father of the Green Revolution,” MS Swaminathan, criticizes GM crops for being unsustainable, outlines the ways in which Bt cotton has failed in India, and calls for a ban on future Bt and Ht crops in India. The authors say, “There is no doubt that GE Bt-cotton has failed in India: it has failed as a sustainable agriculture technology and has therefore also failed to provide livelihood security of cotton farmers who are mainly resource-poor, small and marginal farmers. That a plea has recently been made to Bt-cotton farmers to adopt the time-honoured traditional integrated pest management (IPM) system to sustain Bollgard II cotton points to the relative effectiveness of a traditional vis-à-vis modern technology. It is unethical to ask farmers to first adopt the highly expensive technology of Bt-cotton and when it subsequently failed, to then introduce an inexpensive traditional technology to protect Bollgard II cotton.”

The authors also quote Keshav Kranthi, the former Director of Central Institute for Cotton Research (CICR): “Bt cotton was supposed to have conferred two major benefits to cotton production: (a) high yields due to effective protection of bolls from bollworm damage and (b) reduction in insecticides recommended on bollworm control. Official data show that none of these promises was kept in the past ten years in India.”

October 2015: Whitefly destroys 2/3rd of Punjab’s cotton crop, 15 farmers commit suicide Pests attack farmer’s GM Bt insect-resistant cotton crops in the Punjab. This problem of secondary pests moving into GM cotton fields is continuing to play out all over India. Pesticide use has gone up in every cotton growing state in India except one. It’s the smallest and poorest farmers who pay the price

Cotton is an important cash crop in India. It is grown on 12 million hectares, making India the second largest producer of cotton in the world, behind China. Insect-resistant GM (Bt) cotton is the only GM crop currently grown in India. It was introduced in India by Monsanto in 2002, under the trade name Bollgard, in a joint venture with the Indian seed company Mahyco. 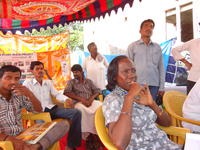 In January 2012, CBAN was invited to participate in an exchange between West African and Indian farm leaders on the problems with GM cotton. Pictured here is Bernadette Ouattara from Burkina Faso, Africa with cotton farmers in the Warangal district of Andhra Pradesh, India..

Websites of some organizations working on GM issues in India