Genetically modified (GM or genetically engineered) flax seed is not sold in Canada. It has never been grown and sold on the consumer market. Nonetheless, in 2009, Canadian exports were found contaminated by a GM flax developed in Canada.

Canada is the world’s leader in the production and export of flax. Flax is one of Canada’s five major cash-crops, alongside wheat, barley, oats and canola.

A GM flax (tolerant to herbicide residues in soil) was developed by controversial scientist and industry proponent Alan McHughen when he worked for the Crop Development Centre (CDC) at the University of Saskatchewan. McHughen called the GM flax, “CDC Triffid” in reference to John Whyndham’s 1951 horror novel, “The Day of the Triffids” which features terrifying flesh eating plants farmed for oil. The flax was developed with public money through provincial government funding to the CDC. However, the CDC halted its GM research after a prolonged public controversy.

The “CDC Triffid” was approved by Health Canada and the Canadian Food Inspection Agency in 1996/1998 but was never commercially grown in Canada. In 2001 about 40 seed growers were multiplying 200,000 bushels of seed for future use but this was all crushed when the flax was taken off the market that year.

In 2001, the Flax Council of Canada and the Saskatchewan Flax Development Commission, representing farmers, convinced the Canadian Food Inspection Agency to remove variety registration for the GM flax, in order to protect the markets for flax exports (around 60% of Canada’s flax exports went to Europe).

The Canadian Food Inspection Agency has verified the below timetable that CBAN constructed:

The economic consequences of flax contamination were severe for Canadian growers. Canada is the world’s leader in flax production and export; flax is one of Canada’s five major cash crops, along with wheat, barley, oats and canola. In late 2009, the European market, which accounted for 68% of Canada’s flax exports, was closed to Canadian flax. Flax acreage in Canada was down by 47% the year after contamination was found and has not entirely recovered. Canada is still struggling to regain its European market. The total cost of this contamination incident to the Canadian industry is estimated at $29.1 million. For further details see CBAN’s GMO Inquiry report “Are GM Crops Better for Farmers?”

History of the Crisis

“GE contamination is already costing the taxpayer. The fact that the Harper Government recently pledged up to $1.9 million to help companies pay for testing flax seed is evidence that GE contamination can cost the Canadian government – and this is without the government compensating farmers for their testing costs or market loss. Contamination is inevitable and these costs will keep reoccurring.” – Lucy Sharratt, CBAN Coordinator, from March 16, 2010 Press Release Parliament to debate the need for export market acceptance before commercial release

March 4, 2010: Farm saved flax seed protected! Grain company Viterra and others wanted to force farmers wishing to grow flax in 2010 for Europe to abandon their farm-saved seed and purchase certified seed instead. The industry failed in this attempt. The reversal was announced by the Flax Council of Canada after it learned that that breeder seed samples from three more flax varieties (that makes five in total!) have tested positive for GE contamination! Farmers were very clear that they wanted to keep their saved seed. About 75% of Canada’s flax farmers use farm-saved seed. “The best solution is to test the seed supply, both farm-saved seed and certified seed,” said National Farmers Union President and flax producer Terry Boehm. Buying certified seed would have added another cost to farmers who face lower prices and market uncertainty, and are already paying for testing and cleanup. 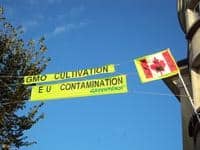