Most genetically modified (GM or genetically engineered) corn ends up as ingredients in processed food or as animal feed.

Genetically modified corn is engineered to be toxic to particular insects. The GM technology transforms the corn plant into a pesticide. The toxin the soil bacteria Bacillus thuringiensis or Bt is expressed in every cell of the plant including the corn kernels. If certain insect pests, including the European corn borers, corn earworms, fall army worms and corn rootworm larvae, try to eat the corn, they will die. The Bt toxin attaches to receptors in the gut of some insects, rupturing the gut and killing the insect. All of the Bt corn sold in Canada is now also herbicide tolerant.

Mexico bans GM corn – January 2020: Mexico will “revoke and refrain from granting permits for the release of genetically modified corn seeds into the environment” and phase out of GMO corn imports by 2024 as well as a phase out by 2024 of the use of the herbicide glyphosate. Mexico is largely self-sufficient in white corn used to make the country’s staple tortillas, but depends on imports of mostly GMO yellow corn from the United States for livestock feed. Click here for information and the unofficial translation from the US government. 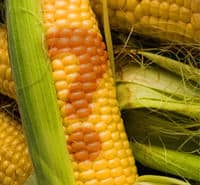 Is your sweet corn genetically modified? The only way to find out is to ask. You have a powerful voice when you ask your local farmer or write to the head office of your grocery chain.

Click here for a factsheet on GM corn to help you take action. Your consumer actions are making a difference!

There is very little GM sweet corn grown in Canada and the US.

2020: CBAN Member group Vigilance OGM tested corn samples from 20 stores in Quebec and did not find any GM sweet corn.

2015: CBAN Member group Vigilance OGM tested 43 samples of fresh sweet corn in 15 different cities in Quebec in 2015 and did not find any GM sweet corn. Seed sellers are saying that they sell few or no GM sweet corn.

2014: CBAN tested 137 samples of fresh sweet corn in 9 provinces and only found one GM sweet corn (sold in a Metro grocery store in Quebec).

November 14, 2013: Following tests conducted in Canada by CBAN, Friends of the Earth US released the results of their tests on sweet corn samples. Tests of sweet corn purchased in the U.S. did not find any GM sweet corn except for two samples, one from Ontario and one of unknown origin. “We were alarmed to find a significant amount of GM sweet corn in Canada, and are shocked that Canada could actually be a source of genetically engineered sweet corn to U.S. consumers,” said Lucy Sharratt, Coordinator of CBAN. New study: GMO sweet corn rare in U.S. supermarkets.

On July 15, 2009 Monsanto and Dow AgroSciences announced that they received approval to introduce their new eight-trait GM corn ‘SmartStax’ in Canada and the US. GM “SmartStax” corn produces six different insecticidal toxins and is tolerant to two herbicides.

It was allowed onto the market in Canada without a safety evaluation from Health Canada. Health Canada does not classify “SmartStax” as a “Novel Food” because it has previously approved all of the eight GM traits individually, in earlier crops. Health Canada says that combining eight GM traits together does not create any new risks and does not need any safety evaluation. The Canadian Food Inspection Agency authorized the environmental release of ‘SmartStax’ but never conducted an environmental risk assessment and actually substantially weakened its environmental stewardship rules for the crop.

Codex international food safety guidelines that Canada helped to negotiate clearly state that stacked traits can lead to unintended effects and should be subject to a full safety assessment. 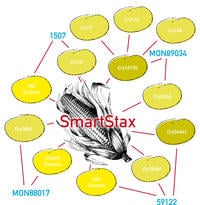 The UN Codex guidelines for GM food safety assessment state that “unintended effects in recombinant-DNA plants may also arise through the insertion of DNA sequences an/or may arise through subsequent conventional breeding of the recombinant-DNA plant.’’ (this is how stacked trait GE crops like ‘SmartStax’ are produced – through the conventional breeding or crossing of GM plants) and that such crops should go through a full safety assessment (para 14, CAC/GL 45-2003).

The international Codex Alimentarius Guideline for the Conduct of Food Safety Assessment of Foods Derived from Recombinant-DNA Plants clearly recommends safety assessments of stacked trait GE crops. The Guideline clearly states that unintended effects can arise not only from genetically engineered (GE) plants, but can also arise when those GE plants are crossed via conventional breeding (as in the case of stacked-trait crops such as ‘SmartStax’): “Unintended effects in recombinant-DNA plants may also arise through the insertion of DNA sequences an/or may arise through subsequent conventional breeding of the recombinant-DNA plant” [boldadded] (para 14, CAC/GL 45-2003). Furthermore, the Guidelines also state that such crops should go through a full safety assessment: “The assessment for unintended effects takes into account the agronomic/phenotypic characteristics of the plant that are typically observed by breeders in selecting new varieties for commercialization. These observations by breeders provide a first screen for plants that exhibit unintended traits. New varieties that pass this screen are subjected to safety assessment as described in Sections 4 and 5” [bold added] (para 17, CAC/GL 45-2003).

Canada has approved 2,4-D-tolerant GM corn and soy. On October 15, 2014, the US government also approved Dow’s 2,4-D/glyphosate herbicide mix, to go along with GM 2,4-D tolerant crops. Now Dow AgroSciences has all the approvals it needs to start marketing these GM herbicide tolerant crops in Canada and the US.