The genetically modified (GM or genetically engineered) pig called “Enviropig” has been shut down thanks to CBAN and your action. Thanks to your support and actions we have stopped the GM Pig!

May 2018: Researchers in China, including a scientist who worked at the University of Guelph (Ontario) on the Enviropig, are genetically engineering pigs that are much like the Canadian GM pig. Results show that the amount of nitrogen and phosphorus in the transgenic pigs’ manure was reduced, and the animals’ growth rate was improved. Read the summary in the The Western Producer.

In 2012, the hog industry group Ontario Pork stopped funding the GM pig research at the University of Guelph in Ontario. The university has now closed down its active research and ended its breeding program of GM pigs. The GM pigs have been destroyed. The pig was engineered with genetic material from a mouse to reduce phosphorous in its feces. It could have become the first GM food animal approved in the world. 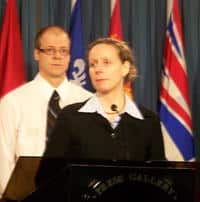 April 3, 2012 “I had the feeling in seven or eight or nine years that transgenic animals probably would be acceptable. But I was wrong. It’s time to stop the program until the rest of the world catches up” – Dr. Cecil Forsberg, “inventor” of Enviropig. Read the full New York Times article.

This victory comes at a critical moment

The first GM food animal could still be introduced in North America if we do not stop the small U.S. company AquaBounty from getting approval for its GM Atlantic salmon. Just like the GM pig, the GM salmon is designed to support factory farming. It is not wanted by consumers or the aquaculture industry. If a GM fish is introduced, it will also be harder for us to stop other GM foods, crops and animals.

There are key fights before us in Canada. We can still stop GM alfalfa – a crop that was introduced in the U.S. but not yet in Canada. We need to stop GM alfalfa to protect organic food and family farms that are at the frontlines of GM resistance in North America and are central to the economic revival of our farm sector.

Corporations are seeking to genetically engineer staple crops such as wheat and rice but they are meeting formidable global resistance.

Our victory over the GM “Enviropig” shows that Canadians are prepared to fight genetically engineered food, crops and animals – and we will win. We can stop genetic engineering. We are already succeeding.

You can help us build our movement – join us now! Donate today.

The goal of the GM Enviropig™ was to provide intensive livestock operations (factory farms) with a product to reduce the amount of polluting phosphorous they produce. Phosphorous from animal manure is a nutrient for plants that becomes a pollutant if there is too much of it for crops to absorb, and the excess runs off into streams and lakes.

There are already many solutions to this problem including reducing the number of pigs raised in one place, changing feed ingredients, trucking liquid manure longer distances, dry composting manure, or expanding the area of land for spreading manure. Additionally, there is already the cost-effective, simple technological fix of a phytase supplement that can be added to hog feed.

Click here to view CBAN outline the arguments against Enviropig.

Enviropig™ is genetically engineered to produce the enzyme phytase in its salivary glands to enable more effective digestion of phytate, the from of phosphorus found in pig feed ingredients like corn and soybeans. Scientists inserted a transgene sequence that includes an E-coli bacteria phytase gene and a mouse promoter gene sequence.

In February 2010, Environment Canada granted approval to the University of Guelph for the reproduction and exportation of Enviropig™. Health Canada could approve Enviropig™ for human consumption at any time.

Article: “Enviropig™: A piggy you hope to never meet at the market”, Common Ground magazine, by Lucy Sharratt, June 2010.

March 2010: The National Farmers Union of Ontario passed a resolution against Enviropig at their March 20, 2010 AGM: “THEREFORE BE IT RESOLVED that the NFU oppose the commercial production of the Enviropig in Canada and request that Ontario Pork and OMAFRA withdraw support for the Enviro Pig and U of Guelph shut down the project immediately. Further, that NFU-O request that these financial resources be redirected to research that fits the real needs of hog producers in Ontario and Canada.” Read the full resolution here.

Livestock breeding in the hands of corporations, Article, Seedling, January 2008.